How to treat LARS? 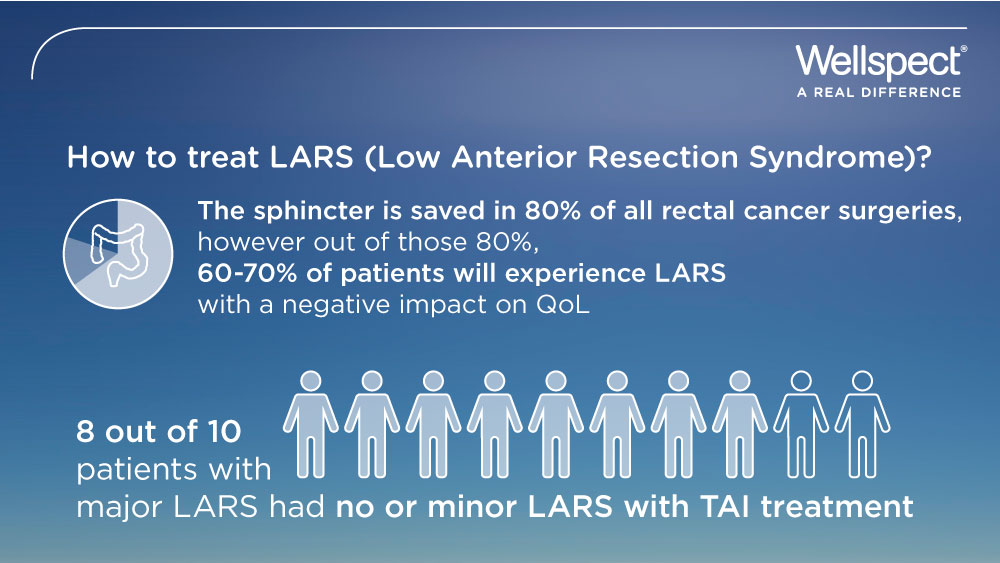 In this clinical study by Enriquez-Navascues et al., the primary objective was to assess the efficacy of transanal irrigation (TAI) and posterior tibial nerve stimulation (PTNS) in the management of patients with low anterior resection syndrome (LARS). After rectal cancer sphincter-saving surgery, about 60-70% of patients experience LARS. LARS is a combination of symptoms including:

The symptoms can be categorized by severity with the LARS score  of:

TAI and PTNS are treatments for fecal incontinence and constipation, and this study explored the clinically relevant improvements in patients with major LARS who adhered to TAI and PTNS by randomizing patients into either treatment arm. Before treatment started and after 6 months of treatment, the LARS score, fecal incontinence score (Vaizey score), obstructed defecation score (Altomare scale), global health status/quality of life (EORTC QLQ-C30) and visual analogue scale (VAS) for satisfaction with the treatment was collated and analyzed.

There were 10 patients that completed the TAI arm and 13 in the PTNS arm. A significant decrease was seen in both groups on the LARS score and fecal incontinence score mean values, but it was only clinically relevant in the TAI arm where 8 patients changed their LARS category from major to minor or no LARS. The authors conclude that TAI, but not PTNS, improves chronic major LARS and suggest that units that perform rectal surgery should be able to offer TAI as a treatment.

This Science Blog provides up-to-date research, current trends and medical reviews in your therapy area. Bulletins are delivered in a monthly science review, put together by our medical affairs team.

Once subscribed, you will also receive other clinical articles periodically which may be of interest to you, hot off the press!